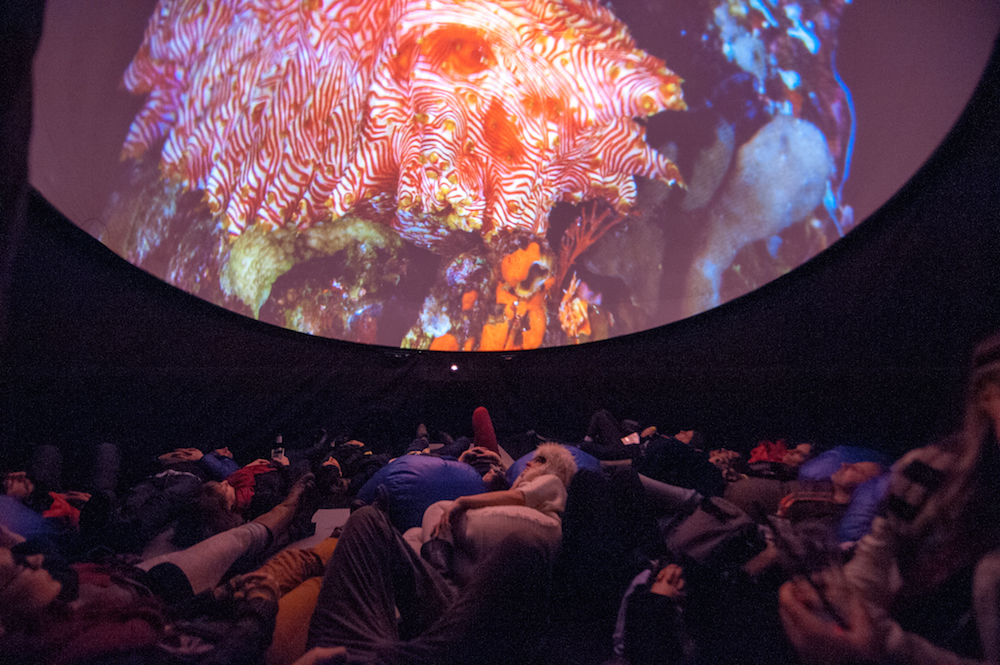 Klip Collective's What's He Projecting in There? (photo by Ryan Kobane); © by the Sundance Institute. Used with Permission.

As you progress through Transmedia Marketing, you will encounter hundreds of content and marketing wunderkinds, examples of entertainment and media properties that hit the mark on many key criteria—from iconic graphic expression to fully engaging audiences. And, you will see how the key storytelling and marketing values imbued in them apply to your media property.

This section features a small sampling of entertainment and media projects highlighted in many other on various media platforms throughout, as examples of specific approaches or techniques. 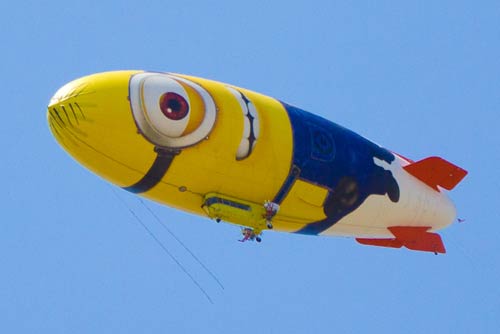 “Despicable Me 2 Blimp” by Gavin St. Ours; Licensed under Creative Commons via Wikimedia Commons

Universal’s Despicable Me 2 Depicablimp over California.

Despicable Me 2, the animated film sequel about little yellow henchmen and the evil Gru, which premiered in the US in July of 2013, was introduced to US film audiences six months before via the Despicablimp, a 55-foot-high and 165- foot-long blimp depicting a Minion. It crossed the country three times, appearing at key events, and audiences could track its journey via the film’s Web site. Universal Pictures ensured that the blimp was in Hollywood on the day of the press junket and later at its US premiere. If the film had premiered in April, the blimp wouldn’t have been as effective because fewer US audiences would have been outside. Universal’s Despicable Me 2 sequel grossed more than $300 million in box office sales.

But the appeal of the Minions didn’t end in theaters. As part of the sequel’s release, a free mobile Despicable Me role-playing game launched, which rose to be one of the top free iPhone, iPad, and Android apps, downloaded more than 100 million times in its first three months. Several children’s books were released and Despicable Me universe-inspired virtual items were available in the catalogue for the massively popular multi-player online game Roblox. Around the sequel’s release, downloads of the original movie Despicable Me and existing Minion Madness mini-movies on iTunes, Amazon, and Google Play topped the charts. So the new film, games, and books for Despicable Me 2 also served as an effective marketing tool for existing film and music on other platforms—and visa versa.

The Dark Knight’s “Why So Serious?"

Another ARG developed by 42 Entertainment (the creators of “The Beast”) was “Why So Serious?” for Warner Bros.’ The Dark Knight. It also joined participants in a common goal. The 2007 film’s tagline, “Why So Serious?” gave a nod to the film’s protagonist, The Joker, who had not appeared in a Batman film for almost 20 years. “Why So Serious?” connected the fiendish character to audiences’ real worlds, engaging fans with Web sites and real-world sites that fleshed out the fictional Gotham City universe.

Appropriately, it launched on April Fool’s Day—14 months before the film’s release.

The Joker’s Web site, WhySoSerious.com, had a “to do” list for audiences that grew as the film’s release approached. Superfans who completed these tasks were rewarded with communications from The Joker, leading them through elaborate scavenger hunts with teaser videos, Web sites, real-world bakeries, and bowling alleys. These steps further rewarded die-hard fans with working mobile phones that eventually sent them texts about hidden online games and clues. This multi-month campaign culminated in free tickets to pre-release screenings of the film. The “Why So Serious?’ campaign engaged more than

10 million unique players in 75 countries in a highly-interactive game experience with the ultimate reward of direct interaction with The Joker. 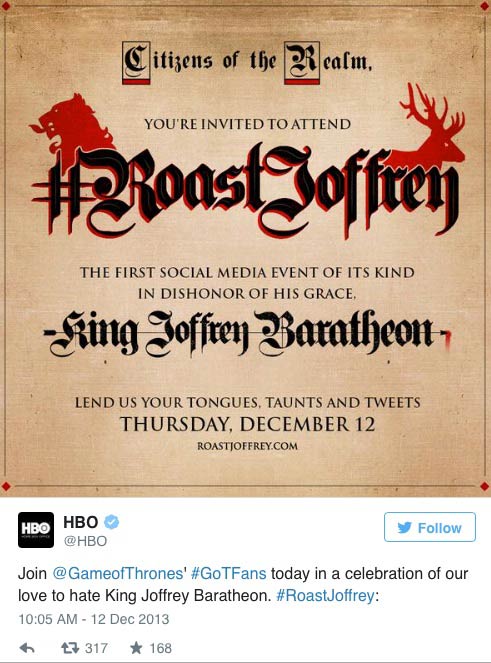 HBO’s call to friends and foes to roast the evil boy king in Game of Thrones.

On television, HBO blended the real world and the fictional universe of Game of Thrones for their social story to promote the Season 4 premiere. The previous season’s final Game of Thrones episode, “Red Wedding,” killing off some of the show’s most beloved characters in a bloodbath, was HBO’s most social show in its history. The campaign, created by 360i, capitalized on the vehement conversation about the most despised character on all of social media, King Joffrey Baratheon, and sustained it offseason. It mixed the emotion of hate for the young king with the socially-viral technique of Comedy.

HBO launched an irreverent social media roast of the program’s reviled ruler on Twitter, Instagram, Vine, and Facebook using the hashtag #RoastJoffrey. Superfans, citizens such as Arya Stark and Hodor, stars such as Maisie Williams and Kristian Nairn, and even real-world brands spewed their venom. The Game of Thrones Twitter account hosted the roast, the hashtag tagged the roast content, and the Web site, RoastJoffrey.com curated the content. The campaign garnered more than 40,000 tweets, including @Charmin’s, “There are some people so crappy even we won’t go near them. #RoastJoffrey #tweetfrom thethrone.” Rival network @NBCHannibal chimed in, “#RoastJoffrey? Sounds delicious.” The social currency of the campaign demonstrated the degree to which audiences and other brands would cross that reality-fiction line.

With diminishing attention spans, audiences may be more likely to participate in shorter experiences such as Game of Thrones’ roast than in multi-month campaigns such as The Hunger Games. Hybrid campaigns may emerge, with multiple stand-alone engagements that together add up to something bigger.

What rises to have social currency is like the process of natural selection. In evolutionary theory, the changing environment renders some variations in traits more advantageous; in the current media landscape, the changing appetites and tastes of audiences render some new ideas or innovations more engaging. So media makers and marketers should keep mutating, that is, creating new content to see what catches on. 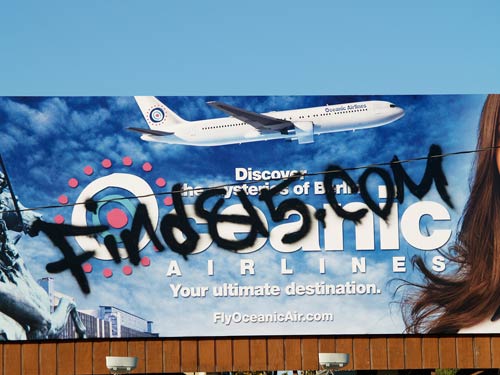 Web sites also can be part of the story world. From the beginning, the ABC series Lost took the inherent mystery of the series’ TV storyline and brought it online and into people’s real lives during the off-season. Various Web sites featured prominently in the five-week viral campaign for the 2008 Season 4 premiere. The network created an entire backstory universe around Oceanic Airlines, whose Flight 815 lost radio contact six hours after it departed from Sydney, stranding the Lost characters on the deserted island. The campaign began with an airline press release reporting that it was suspending the search for the lost plane. The press release’s telephone number, TV spots, and billboards for Oceanic Airlines all led to the fictional Web site, flyoceanicair.com.

The site looked like a transcontinental airline site, but the welcome video was hacked by Sam Thomas, the main character of the marketing campaign. Sam reported he wasn’t giving up the plane’s search because his girlfriend Sydney was a flight attendant on Flight 815. A second Web URL, find815.com, then flashed on the screen. It was also revealed during a faux airline TV spot and on fake billboards in each character’s hometown, which were later graffiti-ed with the URL.

Find815.com had video teasers, a virtual desk (with voicemail messages and e-mails) and a Lost diary. It provided five weeks of clues to superfans about whether the plane had been found and why the airline was keeping mum about it. The campaign energized Lost devotees who created an active blog and Wiki to keep track and share it all. 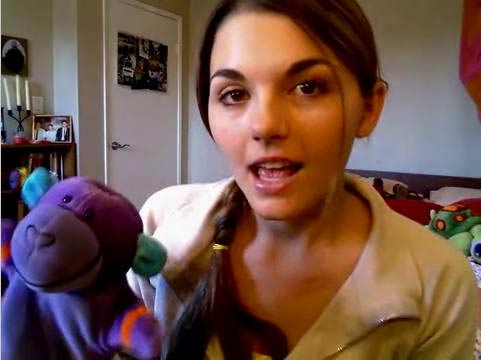 By Lonelygirl15 Studios; Licensed under Creative Commons via Wikimedia Commons

The LonelyGirl15 YouTube vlog that audiences thought was real but was fictional; Bree was played by a 19-year-old New Zealand actress.

Vlogs can also be part of a fictional universe. Webisodes are rooted in early fictional online vlogs, such as LonelyGirl15. In 2006, a teenage girl named Bree trained the camera on herself and began talking on her YouTube account, LonelyGirl15, about normal, everyday teenage minutiae. She made reference to real-world YouTube characters and communicated with her followers on her MySpace page. But over time her vlog entries veered toward her family’s mysterious cult-like religion, “The Order,” and later her parents’ disappearance after she refused to attend a secret ceremony required by the cult leaders. After the first season, the program was “outed” as fictional, which gained worldwide attention and angered many.

At its height, LonelyGirl15 posted five videos per week. Near the end of its two-year run in 2008, the series had more than 125,000 YouTube subscribers and more than 110 million views across multiple platforms.

LonelyGirl15 created a new model for transmedia storytelling and marketing in which the character breaks the fourth wall and tells the story from their POV, often joined on camera by other characters and supported by content on other media platforms. It also was the first Web series to use product integration. 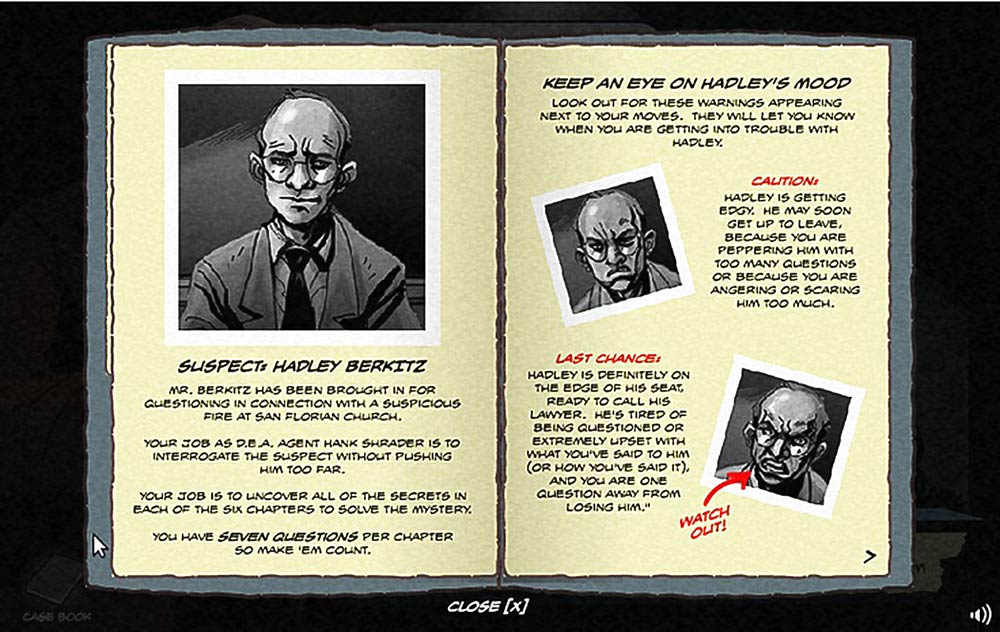 In Breaking Bad: The Interrogation, players could become DEA Agent Hank Schrader and interrogate a suspect who witnessed a suspicious fire in the basement of a church.

As Hank, players grilled the only witness, weasly Hadley Berkitz, who volunteered at the church and did the bookkeeping to uncover a sinister secret. Players were presented with sets of dialogue options (in comic book style) to choose from that were hard-hitting or oblique. The goal was to get the suspect to give up evidence (following a dialogue tree) to uncover more information without the suspect lawyering up, which ended the game.

“Fanboys” and “fangirls” of beloved properties and story worlds are so interested in the minutiae of a project that product news or promotional assets offer viral opportunities.

Two days before the box art reveal for Halo 4, Xbox used it as a shareable social opportunity to keep fans feeling like insiders. They sliced the box art up into 32 pieces and seeded each piece across 32 popular social fan communities, challenging fans to cooperate and solve the puzzle together. Within a half-hour, the puzzle was solved; within an hour, Halo 4’s box art and the social puzzle was the top story on Kotaku and was then picked up by numerous game, entertainment, and news sites. The social media conversation tracking registered a 92 percent positive sentiment.

The release of Marvel Super Heroes characters on social media was the basis of Warner Bros. Games’ LEGO Marvel Super Heroes videogame launch in early 2013, allowing audiences to relate individually to the characters they loved and be immersed in a thriving community of fandom for all things Marvel and LEGO. The campaign used real-time social media listening tools to introduce the game’s characters, support key announcements and the retail release, and engage fans. The team used social sites as portals to insert the characters into broader, real-time pop culture happenings. They created humorous photos with different Marvel Super Heroes characters commenting on different cultural conversations. There were postings for Thanksgiving, “Pass the Shawarma, Please” and the opening weekend of the The Hunger Games, “Shot arrows before it was cool.”

Scholastic’s The 39 Clues is a series of 10 children's adventure novels written by various authors that chronicle the lives of a boy and girl who are on a quest to find 39 clues that reveal their family’s secret power. Each book has hidden clues that send them to collectible cards and interactive online games at the 39 Clues Web site. The first book series débuted at #1 on the New York Times bestseller list and the highly-popular book collection has created tie-in merchandise—cards; a board game; an iPhone app, Madrigal Maze; and a Steven Spielberg film.

Transmedia and interactive storytelling explore the relationship between technology and story. There’s been a real shift in rethinking what a film is. It doesn’t necessarily need to be a film or video. When you think about the Web and social media as the project itself, not just as a way to support a linear film, then storytelling kind of pops.

Other Cases Worth Checking Out