Martin Scorsese Presents the Blues serves as an overall teaching case study throughout Transmedia Marketing: From Film and TV to Games and Digital Media providing media makers and media marketers with the structure and elements of a sound marketing, outreach, and engagement plan.

It teaches readers how to frame and support that plan with use of secondary and primary research, identification of key audiences, determination of brand essence, and setting of measurable goals and objectives for evaluation. This multi-platform project also provides insight and detail on executing that plan—from announcing the project to the press, industry, and audiences to developing a promotion campaign to reach audiences through ads, trailers, online content, and events.

By the turn of the twentieth century, the supremely American music genre—the blues—had suffered a downward slide in popularity and was under acknowledged for its profound influence on virtually all music—soul, country, rock ’n’ roll, hip-hop, and jazz. While a handful of blues legends remained, very few recognizable younger artists represented the next blues generation. Blues music sales were down and the genre was often combined with other categories to form hybrids with broader appeal. Common perception was that the blues was a nearly defunct, sad, and overly simplistic art form that spoke only to African Americans.

To change all that, on September 28, 2003, Martin Scorsese Presents the

Blues—a week-long primetime film festival broadcast of seven impressionistic independent documentary films—each directed by a different film visionary including Martin Scorsese, Wim Wenders, Clint Eastwood, Mark Levin, Richard Pearce, Mike Figgis, and Charles Burnett—premiered nationally on PBS. Produced by Vulcan Productions and Road Movies, executive produced by Martin Scorsese, and sponsored by Volkswagen, the TV series anchored a cross-platform media project—on air, online, in print, in schools, and on the road—designed to raise awareness of the blues and its contribution to American culture and music. In addition to the TV series featuring scores of blues and music greats, The Blues cross-platform project included a content-rich Web site on PBS.org; a 13-part companion radio series distributed by Pubic Radio International; a companion book by HarperCollins; a high-profile concert at Radio City Music Hall; a theatrically-released concert film directed by Antoine Fuqua; a cadre of music CDs and DVDs/videos from Sony and Universal; a traveling museum exhibit by Experience Music Project; high school music and social studies curriculum; and an extensive “On the Road” grassroots tour of film, music, and cultural events.

To capture the authentic emotional resonance of the blues, The Blues took to the road and to the people with “The Year of the Blues.” Kicking off in early 2003 with the Congressional Proclamation and a landmark, star-studded concert at Radio City Music Hall with 50+ artists, “The Year of the Blues” was celebrated “On the Road” with a national schedule of 120+ high-profile and grassroots film, music, and heritage events. The Blues cross-platform media event crescendoed in the fall with the TV series and was amplified by immense media coverage and buzz. Throughout, The Blues was supported by a massive awareness campaign with music icons such as B.B. King, Bonnie Raitt, and Mick Jagger and newer artists such as Chris Thomas King, Shemekia Copeland, and Chuck D. In tandem with the grassroots tour, the campaign included media relations; TV, radio, print, online, and mobile advertising; online and guerrilla marketing; on-air, in-store, and in-flight promotion; and strategic partnerships with American Airlines, House of Blues, W Hotels, Best Buy, Barnes & Noble, Experience Music Project, and the Blues Foundation. The project reached music and film aficionados, cultural leaders, educators, the press, Hollywood, and Capitol Hill. The Blues was the “can’t miss” media event of the fall of 2003, creating a true cultural awakening and resurgence of the blues.

One of the most extensive awareness campaigns in PBS’ history, The Blues garnered 1.7 billion positive media impressions via publicity, online marketing, events, and on-air and online promotion. It delivered 1.2+ billion impressions via traditional media coverage, 113 million online, and 2+ million on the ground, through the project’s “On the Road” tour.

As many as 60 million people intersected with The Blues media components, including 19.5 million TV viewers in the first week of broadcast and 20 million unique Web visitors to the project site in the first three weeks. The project also created lasting cultural impact, reaching key target audiences including 50,000 high school teachers and 1 million students who would study, celebrate, and play the blues for years to come. And, it reached numerous social, media, and political influencers in Congress, in Hollywood, and at cultural events – from the Kennedy Center to the Cannes Film Festival. Finally, The Blues project lifted the blues music genre and its artists, generating an overall 40 percent uptick in the sales of blues CDs, a staggering 500 percent increase among key retailers in the few weeks after the project’s launch, and the donation of revenue to The Blues Foundation for aging artists. 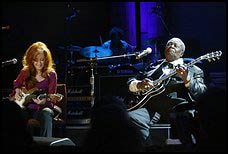 Bonnie Raitt performs with blues icon B.B. King in Salute to the Blues concert at Radio City Music Hall, in the Antoine Fugua-directed concert film Lightning in a Bottle.

Martin Scorsese Presents the Blues was a massive multi-platform project with hundreds of players. The key internal spokespeople included executive producer Martin Scorsese and other film directors, Clint Eastwood, Wim Wenders, Mark Levin, Richard Pearce, Mike Figgis, and Charles Burnett. It also included the four day-to-day project leads: Margaret Bodde, producer (and executive director of Martin Scorsese’s The Film Foundation), whose primary focus was to ensure that Martin Scorsese’s (Cappa Productions now Sikelia Productions) vision and goals for the project were achieved; Alex Gibney, the series producer (and founder of Jigsaw Productions); Bonnie Benjamin-Phariss, director of documentary films at Vulcan Productions; and Transmedia Marketing’s author, Anne Zeiser, who served as the project’s marketing lead and was the director of national strategic marketing for WGBH, which presented the project nationally for PBS. The radio series, CDs and home video, book, and museum exhibit had spokespeople available to provide detail on each platform.

These and many more players contributed to the immense reach and success of this project. The Blues won two Grammys at the 2004 Grammy Awards, and its cross-platform, marketing, and outreach won PR Week’s “Arts & Entertainment Campaign of the Year,” with judges calling the project "well organized" and "brilliant."  In addition, the project won the 2003 W.C. Handy Blues Award; a Silver Plaque at 2004 Chicago International Television Competition; a Grand Prize in “TV Series Documentary” at 2004 WorldFest-Houston International Independent Film Festival; and a Gold World Medal in “Culture and the Arts” at the 2004 Radio Programming & Promotion Awards. 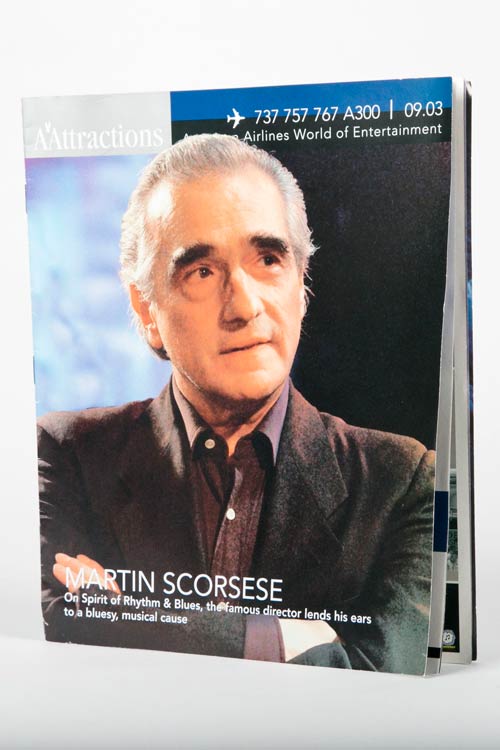 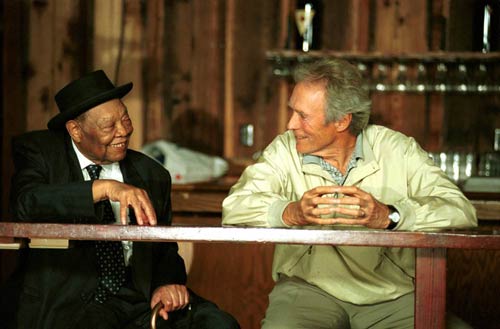 In addition to the many project materials throughout Transmedia Marketing, below is extensive enhanced content and marketing elements referred to in the book. 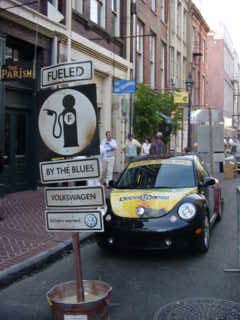 The Blues “On the Road” at the New Orleans Jazz Festival with sponsor Volkswagen.

Advertising Creative – “This Is the Blues”

Other Creative and Collateral

My top festival advice for filmmakers is first, know that it is in your power to set your goals and expectations. You are offering a product as much as festivals are offering you a spot for that product. Second, think about the circuit strategically. Look at your festival strategy in three-month bites to be able to be fleet-of-foot and adjust as you get responses and find where the film is fitting.