Chapter 1: Cinema as Window and Frame 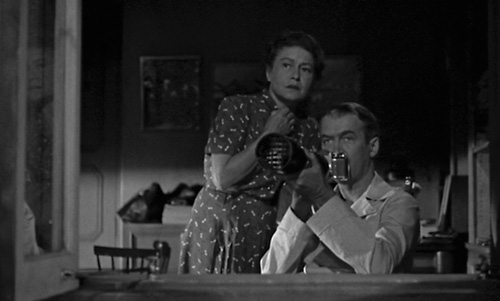 A man, immobilised in a wheelchair, observes through a rectangular frame – as a way to pass the time and entertain himself – the human dramas that unfold before his eyes. He is capable of alternating his visual field between a wide panorama and a closer view for detail. His position is elevated and privileged, while the events seem to unfold independently of his gaze, yet without making him feel excluded. This is one way to summarise the basic tenets of Alfred Hitchcock’s Rear Window (US 1954), which has become an exemplary case study in film theory precisely because the film’s premise is often held to figuratively re­enact the specific viewing situation of classical cinema:1 Having suffered an accident, photographer L.B. Jefferies (James Stewart) is confined to a wheelchair with his leg in a cast. A pair of binoculars, as well as the telephoto lenses of his camera, allow him to switch between long shots of the back yard onto which his window opens and close shots of individual apartments and their residents. Two basic principles, according to the school of theory that considers the cinema as window/frame, can be derived from this situation: first, Jefferies’ seemingly privileged perspective as onlooker and (to a lesser degree) as listener, and second, his distance from the events. The film even provides an answer to the question formulated in the introduction to this book – whether the film is outside or inside in relation to the spectator: As long as Jefferies maintains his distanced role of observer, the events cannot harm him. Not until he – or, rather, his girlfriend Lisa Carol Fremont (Grace Kelly), instigated by him – transgresses this threshold does the world ‘outside’ pose a threat to the one ‘inside.’ However, Rear Window does not resonate in film-theoretical space solely through its emphasis on visibility and distance:

The title Rear Window, apart from the literalness of its denotation, evokes the diverse ‘windows’ of the cinema: the cinema/lens of camera and projector, the window in the projection booth, the eye as window, and film as a ‘window on the world.’2

These and some other key aspects of our first ontological metaphor will be examined and discussed in this chapter.

kogonada: What Is Neorealism?

kogonada’s elegant comparison of two versions of the same material (Stazione Termini, IT 1953 and Indiscretion of an American Wife, US 1953) aims to outline the difference between neorealist style and Hollywood continuity editing. The brief essay is effectively a homage to André Bazin and a good introduction to some important issues around the modern cinema.

Innovative take on Hitchcock’s classic film, which is treated in the first chapter as an example for an allegory of spectatorship. This video essay which uses digital techniques in interesting ways demonstrates how space is constructed by cinematic means.

A film intensely concerned with the act of looking and with the framing of the gaze (implicitly therefore with the mise-en-scène of the image), this essay on Roman Polanski’s Chinatown (US 1974) foregrounds how film stages the act of seeing and being seen as a means to effectively distribute information and guide spectator attention.

The video is part of a series devoted to Ingmar Bergman. The intention was to ‘test’ the different parameters of ‘Film Theory’ (window, door, screen, mirror, face, touch, etc.) by restricting ourselves to the films of one director, in order to underline how this recognised auteur ‘thinks’ in terms of the body and the senses. The videos were also to be presented in a gallery space as installations: see Thomas Elsaesser, “Ingmar Bergman in the Museum?” http://www.aestheticsandculture.net/index.php/jac/article/download/2123/2611 and http://mediacommons.futureofthebook.org/intransition/2014/02/28/bergman-senses-thomas-elsaesser-anne-bachmann-and-jonas-moberg-2007