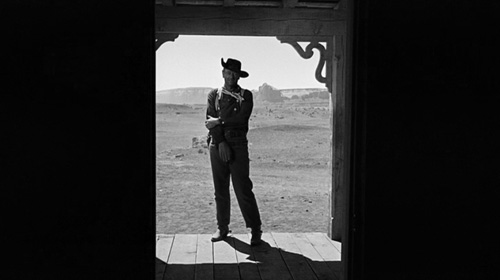 THE SEARCHERS: John Wayne at the threshold.

As the film begins, a shining rectangle illuminates the darkness of the cinema auditorium that, were it horizontal rather than vertical, might be the light-reflecting silver screen itself. This gleaming shape turns out to be a door, which opens onto a – if not the – quintessential North American landscape: Monument Valley, made immortal as the setting and backdrop of numerous Westerns. The camera follows a woman, at first only a silhouette against the bright light, crossing the threshold along with her onto the porch, leaving the darkness inside behind. From far away a man walks toward the settlers’ cabin, a man who is as mythical in Hollywood cinema as the distinctive landscape with the bizarre mountain formations from which he emerges: John Wayne as Ethan Edwards. The motif of entering and leaving, of traversing and crossing – because crossing a threshold always implies leaving a space and entering another – is central to The Searchers (US 1956, John Ford). The film is constructed around a series of crossings and transgressions, and it involves a constant change of places, both literally and metaphorically: It oscillates between familial and racial affiliation, between nature and culture, between wilderness and garden, between convictions and actions. The film ends with a mirror-like repetition of the opening sequence: Edwards/Wayne leaves the house, and in the glowing sunlight walks off into the distance while the rectangular, illuminated doorway gently closes, plunging the spectator into the same darkness of the auditorium from which the film had picked him/her up in the beginning. The bright rectangle of the doorway corresponds to the ‘dynamic square’1 of the cinema screen and also points indirectly to the artificial and constructed nature of the film’s panoramic views. The shock of this transition is almost as unexpected as the shot-countershot sequence in Luis Buñuel’s and Salvador Dalí’s Un chien andalou (FR 1929, An Andalusian Dog) in which a man opens a door and leaves a room, only to be shown standing on the beach in the very next shot. Both films reflexively exhibit the medium’s capacity to dynamically transport us as spectators into an imaginary world, connecting disparate spaces through camera movement, editing, and other devices.

This opening sequence of The Searchers focuses on the threshold; the film is reflecting on itself as it highlights a moment that one can find in almost any film: the passage from one world to another which presupposes the coexistence of two worlds, separated as well as connected by the threshold. For the spectator, it is the threshold between her/his world and that of the film; for the film it is the threshold between myth and reality; and for the actor, it is the threshold between role and image (John Wayne will always evoke certain ideas of American masculinity, of US politics and Hollywood cinema, even before we know anything about the role he plays in a given narrative). The Western, as a quintessentially American genre, tends to charge several kinds of spatial markers and points of crossing with mythological significance, especially the fundamental threshold that makes possible the West(ern) as a cultural category in the first place: the ‘frontier,’ that borderline between ‘civilised land’ and ‘the wilderness,’ which in the nineteenth century was relentlessly pushed from East to West across the North American continent.2 This story of conquering and subjecting the vast expanses of land was then repeated over and over again in twentieth-century art and popular culture: the United States fashioned from it its own myth of self-creation, of which it constantly reminds itself and the world. In film, this myth is based upon an underlying binary opposition of nature/culture: the garden versus the wilderness, cowboys versus Indians, but also cattle barons versus homesteaders (the former have cowboys wandering about with the herd, the latter are settling down as farmers), the law of the gun versus the law of the book, the saloon singer versus the teacher. The Western constantly stages and affirms the demarcation of the frontier and its (necessary) transgression as the basis of US popular culture and the nation’s founding mythology of boundless progress and ever-new challenges to be met.3

1 Through his notion of the ‘dynamic square’ Sergei Eisenstein advocated a less limited and more flexile operation of the (vertical) image format in film. In this context the square is the form that can comprise all other forms. See Sergei M. Eisenstein, “The Dynamic Square” (1931), Selected Works, Vol. 1: Writings 1922–1935 (London: British Film Institute, 1988), 206–218.

2 The seminal works on this topic and the origin of further contributions to the debate is Frederick Jackson Turner, The Frontier in American History (London: Dover, 1996, orig. 1893). Applications of this concept to cinema can be found in Jim Kitses, Horizons West: Anthony Mann, Budd Boetticher, Sam Peckinpah: Studies of Authorship within the Western (London: Thames & Hudson, 1969), and in Edward Buscombe (ed.), The BFI Companion to the Western (London: Deutsch, 1988).

For3 a strong structuralist account of the Western as genre see Will Wright, Sixguns and Society: A Structural Study of the Western (Berkeley, CA: University of California Press, 1975).

Halfway between a supercut and a videographic film study, this essay highlights the importance of transitional spaces such as corridors, hallways, alleys, and others in the cinema of Yasushiro Ozu.

The title sequence is one of the privileged sites of access to a film, as we argue in the second chapter. This short essay with a Hollywood-centric selection presents a montage of glimpses from classic and contemporary openings that have become famous.

An exploration of the (semi-)reflecting surfaces in the films of Leos Carax – dots of lights on surfaces such as water and dark city streets, but also projected images on screens – this auteurist study done by Martin and Lopez, two masters of the audiovisual essay, is an auteurist probe into the (self-)reflecting poetic mode of Carax’ films.

A. Dignan / Kevin B. Lee / Matt Zoller Seitz: A Close Analysis of the Season 1 Title Sequence from The Wire (2008)

This video essay on the credit sequence of the celebrated HBO-series demonstrates the possibility and scope of close readings, a major method in film studies which is also indispensable for most film theoretical undertakings. As the sequence opens each episode it furthermore exemplifies the (aesthetic, cognitive) strategies of drawing the spectator into the specific fictional world.

Gametxo’s reworking of a Griffith biograph short reverse-engineers the film’s parallel strings and re-assembles them into a (partly simultaneous) split screen configuration which corresponds to the film’s imaginary spatial logic. The essay became famous after it was publicly embraced and endorsed by film historian extraordinaire Kristin Thompson on her blog: http://www.davidbordwell.net/blog/2011/09/05/a-variation-on-a-sunbeam-exploring-a-griffith-biograph-film/

The Most Dangerous Game (US 1932, Ernest Schoedsack / Merian C. Cooper)

Trouble in Paradise (US 1932, Ernst Lubitsch)