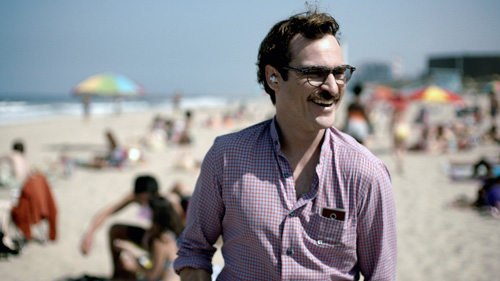 HER: Affectivity and the sensuous envelope of the voice. Courtesy of Photofest / © Warner Bros.

An introverted office worker whose main job is to empathise with other human beings and be the voice of the inarticulate, installs a new operating system on his personal computer which interacts through a voice interface. As his avatar he selects a seductive female and falls in love with the sensitive disembodied voice who relates so well to his anxieties and sorrows. Not unlike himself, making a living as an author of love letters for people who cannot put their feelings into words, the OS is able to emotionally touch his inner self and put him at ease solely with her voice. A hybrid of romantic comedy and science-fiction film, Her (US 2013, Spike Jonze) ingeniously stages the affective encounter of two beings in an age of ubiquitous computing, based on the intimate and sensuous qualities of the human voice. As can be expected from the off-beat genre mix, the relationship between Theodore (Joaquim Phoenix) and the OS Samantha (Scarlett Johansson) soon runs into trouble – and this on both sides. Not only can the love-struck Theodore not get enough of the virtual but all too virtually present Samantha; she, too, wants to give her voice a bodily presence. To this end, Samantha hires a body double whom she instructs via a head-set to enact an erotic scenario with Theodore, which not surprisingly, goes horribly wrong when Theodore is suddenly confronted with his fantasy taking on a real body. The ontological bond between a voice and a body cannot be dissolved or the gap overcome, at least not in a deep and emotionally fulfilling relationship.

Her presents a world of the near future, beyond keyboard input and touchscreen technology in which digital devices surround us and consequently manifest themselves mainly by sound, which is a three-dimensional phenomenon of immersion and enveloping presence. Labour has become affective and immaterial, as physical production has been outsourced to an elsewhere neither visible nor accessible. But such apparent freedom from want has not altered the emotional needs of human beings who would rather be spooned than have dirty sex.1 Put differently, not only the skin but the body as a whole, as outlined in the last section, is a sensuous surface enveloping the body and granting a remarkable array of sense experiences, but such exposure of the senses makes humans also more vulnerable and emotionally volatile. Like the pastel shades and diffuse colour blobs that cinematographer Hoyte van Hoytema creates, the film presents a world in which the self tries to inoculate itself against the demands of others and the permanent emergency of the network society by building a padded bubble of sound and light, both the basic building blocks of the cinema.

kogonada’s montages are always elegant and multilayered – this short essay focuses on the use of sound in the work of Darren Aronofsky, illustrating vividly how the sound and the image track work together to create the audiovisual experience.

Influential video essay on the permutations of the current blockbuster cinema, drawing attention to the use of ‘frontal’ address in the contemporary action picture. Calling blockbusters “engines of chaos” it underlines the importance of sound design, especially the shattering of glass, as if to signal the ‘end’ of cinema as a ‘window on the world.’

Kevin B. Lee / Zhang Ling: What Does China’s Greatest Film Sound Like?

A most welcome departure from the usual concentration on the Western canon and the visual dimension of film, this essay examines the acoustic dimension of a classic of Chinese cinema, Spring in a Small Town (CN 1948, Fei Mu).

A rare collection of trailers from the early sound period give, beyond the historical value in itself, insights into the usage of sound, but also into the ways the makers figured sound to be understood by the audience.

From Bach to the Beatles – an exploration of the employment of music in the films of David Fincher.

The Conversation (US 1974, Francis Ford Coppola)