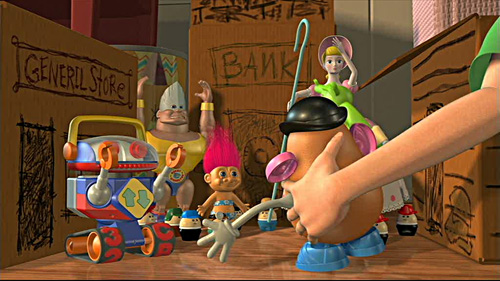 TOY STORY: Whose agency? Mastery and manipulation between humans and nonhumans.

A classic movie situation: in a Western frontier town, the camera pans from the saloon to a wooden shack, and suddenly the criminal One-Eyed Bob appears in front of a Wanted poster featuring his face. The gun-slinging villain robs a bank frequented by farmers and the teacher, but Sheriff Woody saves the day, putting the bank robber behind bars. And yet, at the edges of the frame another presence lingers: the protagonists are in fact toys manipulated by a little boy. Like a director, he stages the scene and creates the unfolding events, animating the figures and giving them voices from just beyond the frame; not until he leaves his room do we realise that the hapless and manipulated toys have a life of their own quite distinct from the scene first acted out (be)for(e) our eyes. Consequently, a double reality unfolds in which the apparent master and manipulator (the boy) in fact is being played with, in a game of illusion acted out by the toys. This shift of agency from the human to the non- or post-human is prepared stylistically with a series of subjective point-of-view shots from the perspective of the toy sheriff being tossed around. Emblematically, the opening of Toy Story (US 1996, John Lasseter) marks a crucial moment in film history, as this film is the first one exclusively made digitally, without any traditional opto-chemical photographic process. Therefore, not only does the narrative of the film dramatise the transition from human to nonhuman agency (from acting body and drawing hand to generated pixel and computing processor), it also allegorically represents the shift from analogue to digital, from photographic to graphic film, from representation to presentation. But as it opens with a familiar movie scene, it also seems to announce that even though everything has changed (underneath), everything will stay the same (on the surface).

A collection of shots from stock situations in science-fiction films having to do with outer space – leaving the spaceship, lost in space, beholding a planet – which aptly shows how similar filmmakers have been in imagining these scenes.