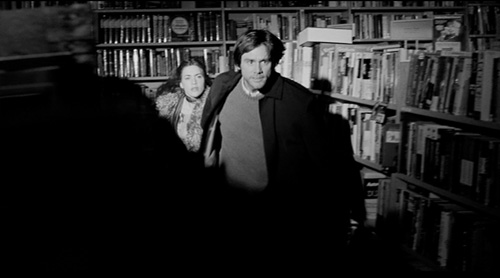 A man wants to forget a woman so dear to him that he cannot bear to lose her. In classical cinema, such a state of mind, bordering on insanity, would have necessitated a string of encounters and events leading to a change of mind in both the man and the woman, so that they can now, both purged of former troubles, be happy ever after. Today, however, these methods no longer seem to work, and instead, the man decides to erase all memories of the woman (after learning that she had done the same to him) by means of a new technological process. During the actual procedure when all traces of his girlfriend are wiped from his mind, beginning in the ‘present’ of the story and going back in time, the man rediscovers how much she means to him despite the mental anguish and suffering her capricious ways have caused him, so he tries to ‘hide’ her in his childhood memories. But the plan fails, and all recollection is apparently gone. The next day, as if following a whim, he takes the train to the place where he had first met his great love and there he meets her (‘once more,’ as it turns out), so that their story begins all over again. Eternal Sunshine of the Spotless Mind (US 2002, Michel Gondry) is emblematic for this chapter because it typifies the contemporary interest in identity, memory, trauma, and twisted or looped temporal structures. The circular, Möbius-strip-like structure of the film calls into question the linear logic of classical cinema, according to which a problem can be recognised and solved, an obstacle can be tackled and overcome. The situation is quite different in Eternal Sunshine: a never-ending spiral is set in motion, and we as spectators are no longer certain of our role in the game a film like this is into, tricked as we, like the characters, are into mistaking ‘replay’ as play – are we impartial witnesses, active participants, or manipulated pawns? Eternal Sunshine and similar films revolve around questions that we have already pursued in previous chapters: Does a film take place inside or outside the spectator’s mind? Is it objective or subjective? Who – or what – is telling a story, and what perspective are we sharing? Is visual perception disembodied (i.e. purely visual) or embodied (i.e. does it require a body and consciousness)?

kogonada: World According to Koreeda Hirokazu

Cinema is uniquely able to focus on the outer surface of the world, on the visible and the audible; this compilation demonstrates how a philosophically inclined filmmaker such as the Japanese Koreeda Hirokazu concentrates on specific aspects of human existence (the fleeting, contingent, and everyday) to convey a sense of existence.

A simple and elegant split screen presents all candles from Tarkovsky’s Nostalghia (SU/IT 1983) simultaneously: “The nine minute shot in NOSTALGHIA of a man carrying a candle is perhaps the most famous shot in all of Andrei Tarkovsky’s films. What if we saw each of the 123 shots in the movie as a candle flickering with cinematic life ... until it goes out?” (self-description).

Nelson Carvajal: Life of the Mind, Life on the Screen

An associative passage through a number of films explores how the cinema can become a life form.

Kyle Kallgren: Between the Lines: Inception

Casting a net from Dziga Vertov’s Man with a Movie Camera via Jean Cocteau’s Life of a Poet, the essay takes a look at Inception in relation to dreams and as an allegory of filmmaking.

A simple action such as a person or an object falling down can be shown in an endless variety of ways which are helpfully collected and systematised in this essay.

The Manchurian Candidate (US 1962, John Frankenheimer)

Eternal Sunshine of the Spotless Mind (US 2003, Michel Gondry)